Are You The One?

Ever since my first crush on my childhood sweet heart I knew I wanted to be a wife, a mother and a home maker. And if I had anything to say about it, all of this was to begin when I turned 19. At least that was my plan. But …you know things don’t always go the way we plan… So in my waiting I thought, hey, why not do some research and see what it takes to make a good marriage a great marriage… So I did and this is the result…After spending time with these couples and documenting their journeys it has been confirmed for me that marriage…well you’ll have to read the book and see. 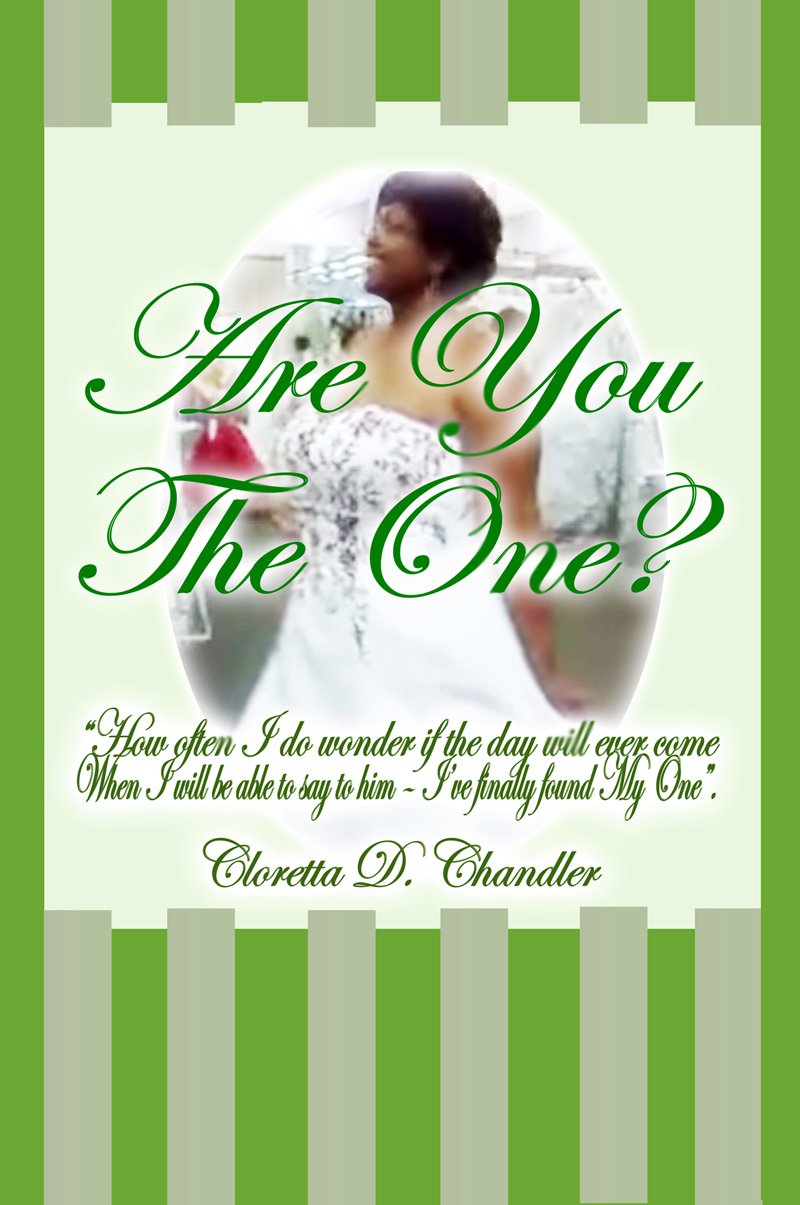 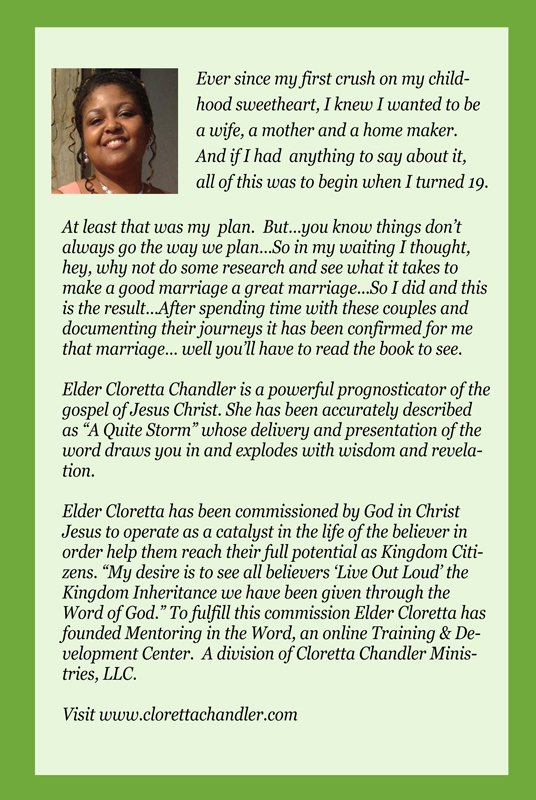 Read a sample of the first chapter below:

LOVE STORY 1: MATCH MADE IN HEAVEN

One of the greatest love stories every told is that of my parents Chan and Rose.  My parents have been married for over 51 years.  Amazing in this day and age.  But what’s more amazing is they raised four great and awesome adults (if I do say so and I do). During their marriage they were the spiritual leaders of a thriving church for over 40 years; they built a youth center and mentored other pastors and church leaders. They did all of this after only knowing each other for 2 weeks prior to their wedding.  Yes, you heard me correctly.  TWO WEEKS.  Here’s how the story goes…

After returning to the States from a four year tour in France I transferred to the Air Force Academy in Colorado Springs, Colorado. John F. Kennedy just won the presidency and gas was 25 cents a gallon and I was an associate minister at St. John Baptist Church. While in the pastor’s study, a lovely young lady on the Cover of the Kansas City call newspaper caught my eye. I read the article and saw that her brother was the Pastor at new Hope in Kansas City, Missouri.  I told my Pastor I was going to drive six hundred miles and find her to propose and return with her as my bride.  There were other ministers in the office at the time and they all laughed at me.  But I was determined.  I knew that she was the one.  I wrote her a letter to introduce myself and asked if I could come see her.  She wrote me back and said. Yes.

When I got there, her family was very protective.  Her mom did not like me at all.  I just wanted to take her out, but Rose was busy.  She said, if I wanted to see her, I would have to go with her to her rehearsals and church.  She had a lot of them, but she had a beautiful voice and I loved her, so I went to every single one and I finally got my date.  We went to a drive-in movie.  I don’t remember the show, but I remember Rose and wanted to start my life with her right away.

I went to her home to ask her father for her hand in marriage.  He told me, “My Rose is grown.  We have already raised her.  Don’t put your hands on her.”  I knew exactly what that meant and promised to love and protect her.  But Rose’s mom did not care.  She said her baby was too young and she would not let me marry her. No way.

When I met Chan I was ready to get married.  I thought he was cute in his uniform and the more we talked the more I knew I wanted to marry him too.

At that time my siblings and I had a singing group The Porter Four. So for the week that Chan was in town I took him to all of our practices and singing engagements. He was a trooper because we were everywhere. Later that week he asked me to marry him. My father gave me permission to marry Chan, but my mother did not like him at all. She said he was too slick.  I had to basically sneak off and marry Chan. We made arrangements to be married on his way back from visiting his parents in Mississippi and then move to Colorado.

My sisters helped me get a wedding dress together… 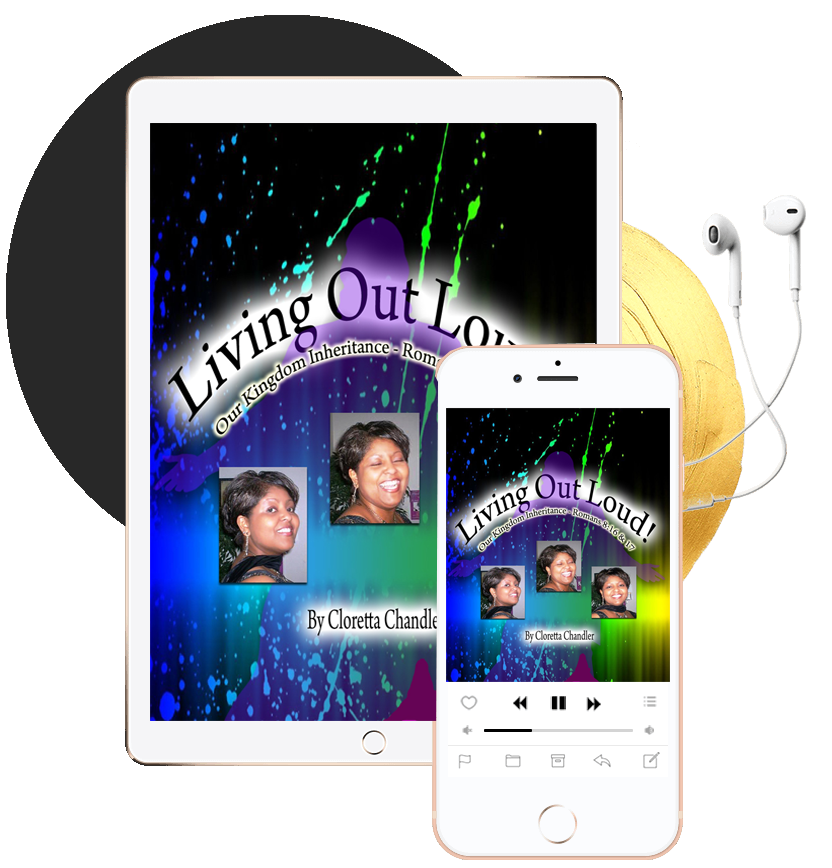 “Living Out Loud!” is one of the many songs this gifted young women has created to glorify God and edify His body of believers

Cloretta Denean Chandler is known as a singer, preacher, teacher, mentor, author and entrepreneur but the truth is she’s a down to earth kind a woman who loves God and cares for people. Cloretta is a native of Pueblo, Colorado, the youngest of four siblings raised in a family of faith in God through Christ Jesus. As a P.K. (preacher’s kid) Cloretta learned the value and worth of being a child of God. She was afforded the opportunity to learn the integral workings of a viable and successful ministry. These lessons have become a fundamental part of her life. In 1998 she accepted her call into the ministry and was licensed in 1999. From the time she was licensed

Cloretta developed into a powerful prognosticator of the gospel and has been described as “A Quite Storm” whose delivery and presentation of the Word draws you in and explodes with wisdom and revelation. In 2004 Cloretta received here Certificate of Ordination and is currently pursuing a Master’ degree in Divinity. Cloretta’s belief and message is that “in order to reach our full potential in Christ we must know who we are as children of God. We must come to the to realize that because of Christ we are no longer bound by the guilt of our past, by sin or shame. We have been given a kingdom inheritance full of power to overcome every obstacle, every heart ache and every pain.”